Every once in a while, I find a recipe which I find I am making again, and again. I am easily bored with food, so this is quite unusual for me. On the salad front, I am continuously making the taco salad recipe – the lime vinaigrette is so light and refreshing and the tortilla chips make it feel a bit naughty and indulgent. It is great for summer evenings when it feels too warm to cook a proper meal.

This recipe sits in the same camp. It has the added benefit of being easy to prepare and can be made well ahead of time – which is great for being able to just grab it out of the fridge and eat when you are ready. I find I am making it for every one who comes to visit at the moment. And then for myself whenever I get the chance. I have also found I can buy large packs of bundles of buckwheat noodles (you can also buy gluten free for those of you trying to avoid gluten!). I make this at the beginning of the week and then have it all week long for my lunch. It is so tasty and light, but yet, still filling. I love it.

I first came upon this recipe by Nigella and somewhere along the line, I managed to misread some measurements. It actually took me a while to realise I was making it with the wrong proportions, in fact, I didn’t realise until just the other day, when I pulled out the measuring spoons and went back to my notes to see what to add. (I had obviously not made it for a while and was double checking the measures when I read them and realised I had been wrong all the time). I made the recipe to the letter… and realised I actually liked it better the other way. I also found I needed the extra liquid if I wanted to keep them for any length of time, otherwise they were just too dry. So, here it is, my variation of the same.

I have reduced the amount of sesame seeds quite considerably from the original recipe. I found 75g was just too much and most of them fell to the bottom of the bowl with nothing to cling to. The packs of black sesame seeds I was able to get were about 45g and even this was probably a bit much. So I tend to judge it by eye, by starting with half the pack and then adding a little bit more as I toss them through the noodles. By all means, add as many as you feel it needs. I also find I prefer the black sesame seeds, which are a bit harder to find at times. As such I usually do a mix of them both which provides a nice contrast of colours. 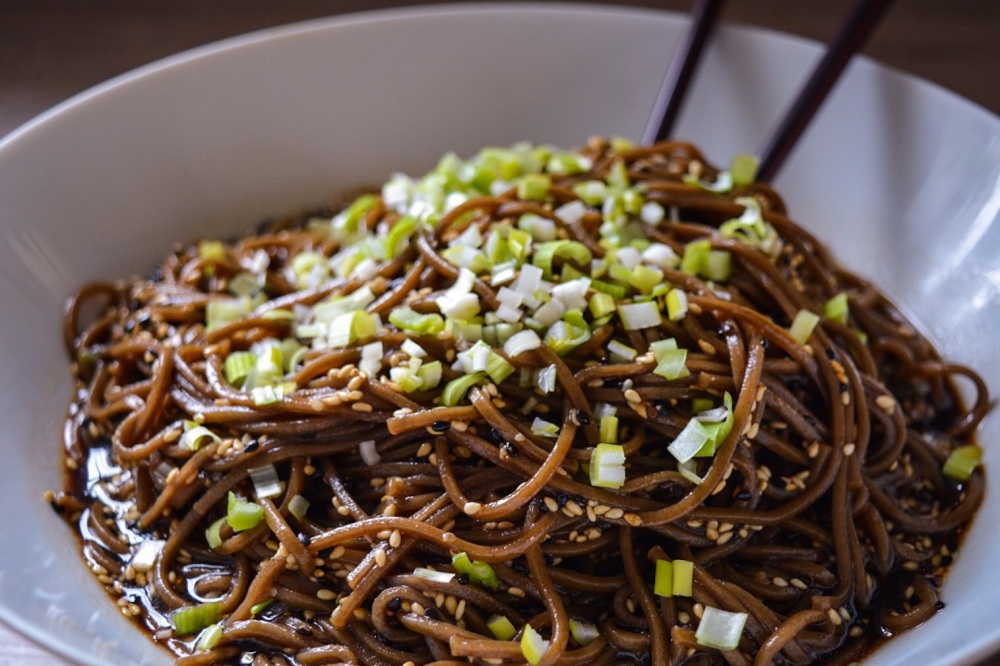 In a large pot of boiling, salted water, add the soba noodles and cook for 6 mins. (You will want the large pot so the noddles can move around, or the ends will stick together and not cook properly.) When the noodles are soft, drain them immediately and run them under ice cold water to stop them cooking any longer and going mushy. Set them aside.

Prepare the spring onion by removing the outer layer and trimming the ends, then cutting along the length to split each into four long strips, then cutting across into small pieces.

In a bowl (I usually use the bowl I will be serving them in) mix together the vinegar, Tamari, honey and sesame oil together until the honey has mixed in. Toss the noodles into the dressing with the spring onion and the sesame seeds. Allow to sit for half an hour at room temperature before serving.

Store any leftovers in an airtight container in the fridge. They should last a few days.