I wouldn’t have ever said I was all that keen on granola. I tried. I bought several types of over the years and after a couple of hesitant bowls it usually finds its way to the back of the larder until I feel it has been open for far too long to be salvageable and can be thrown away without too much guilt. (I don’t like to waste food.)

I keep trying. Maybe it is because it should be good for you, or healthier than regular cereal? So, when a new one comes along with rave reviews, I usually perservere long enough for  a few bowls, until I give in again and acknowledge I am not enjoying it. Usually it starts with a few skipped breakfasts just to avoid it. Before you know it, back into the larder cupboard it goes.

This all changed when I got into eating Açai bowls. It’s amazing how changing just one thing can have such a profound impact. I cannot explain it. It just works. And I love it. But then, I am also not eating regular granola either. This one evolved from the cinnamon granola by Deliciously Ella – she has a lot to answer for, with regards to my new breakfast loves. The base is the same, in that I am using a mix of coconut oil, maple syrup and cinnamon. The other stuff I have messed about a bit and evolved my own.

I added in some buckwheat groats (just sold a buckwheat in most places). When these are toasted they are lovely and crunchy, in a different way to the nuts. For me they are the highlight of this granola. The hemp hearts, I added in to replace some of the other seeds that I was not enjoying as much. They are such a nice alternative and toast up nicely as well. I also added in some goji berries, after the toasted mixture had cooled down, which I prefer in granola then on their own. Their hard chewiness seems to work really well in contrast to the raisins.

Now, I realise there are a lot of ingredients here. This was easy for me, as I usually have these to hand at home anyway. I don’t expect you to do the same by any means. So tweak this for your needs. Even make a smaller batch of the granola – I certainly did when I first tried this out. Now I make a full batch, with some into a jar immediately and the rest going into the freezer for later. 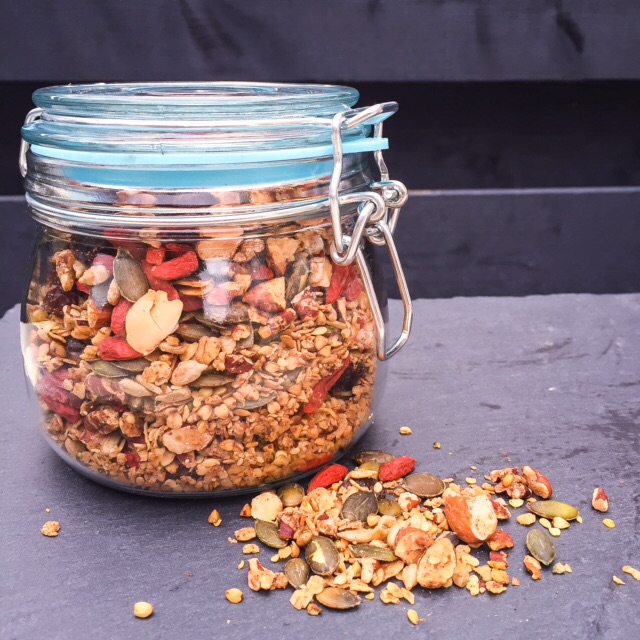 Roughly chop the pecans and almonds, or place them in a food processor and pulse them until they are all partially chopped. You want some small pieces with a few little chunks. Add these to a bowl and mix through with the hemp hearts, oats, pumpkin seeds and buckwheat.

Pour the cinnamon liquid over the nut and seed mixture, stirring through to ensure it has coated all the mixture. Decant the mixture onto a lined baking tray and place in the oven for 40 minutes, stirring a few times to allow even cooking.
Remove from the oven once cooked and allow to cool before adding the dried fruit. Store in an airtight container.

Can be frozen to maintain its freshness for longer.